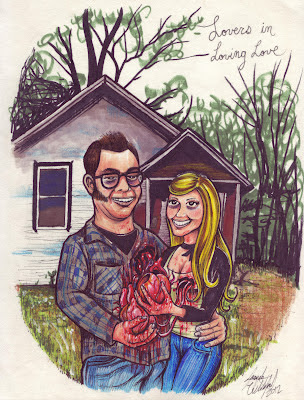 I did this drawing for a couple in Lafayette who are about to get married.  It only cost 'em a couple DVDs that I've been wanting, which is about half the price I charge for a colored drawing this size.  I hope they live happily ever after.
Posted by Joe Whiteford at 7:29 AM No comments:

In December of 2009, I flew to Pennsylvania to meet up with Chad Serhal, Christopher Thomas, and Aaron Richardson. We spent a day in the studio as Calibretto to record a song for a benefit comp. It had been a long time since any of us had played as Calibretto, and it was the first time the four of us had ever gotten together to record. I like what we came up with.
Posted by Joe Whiteford at 8:41 AM 5 comments:


This is a song I wrote for Geoff Arbuckle.  It's the theme song for a show he's been trying to get off the ground called Late Nite Creature Feature.  It was performed by Harley Poe and recorded by Gregg Manfredi, who also played bass and keys.  Wes Plantenga played surf guitar, and Cristian Riquelme played drums.  To find out more about the show, check out latenitecreaturefeature.blogspot.com

Posted by Joe Whiteford at 10:33 AM No comments:

These songs were recorded back in either '09 or '10 with Chad Serhal.  I drove down to his apartment one day, ate pizza, sang and played guitar, and after I went home he embellished each song with his mad skills.  "American Psycho" first appeared on Calibretto's Dead by Dawn ep, and "Class of '97" is a cover of the Statler Brothers' "Class of '57" classic.  The other three songs have each appeared on one or more of Harley Poe's releases.  Enjoy.

Check out what else Chad Serhal is doing at Chadserhal.bandcamp.com or shedoesismagic.bandcamp.com
Posted by Joe Whiteford at 9:45 AM No comments:

Bubbley Brown Vs. The Evil Clown 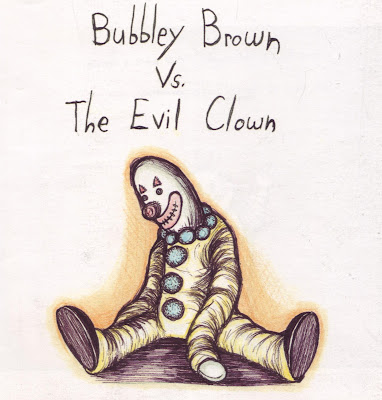 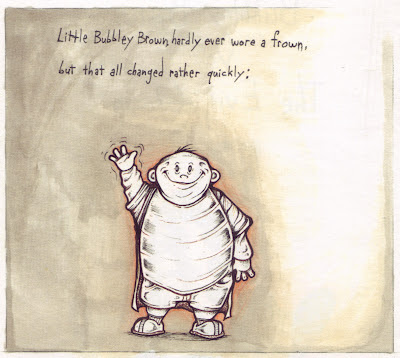 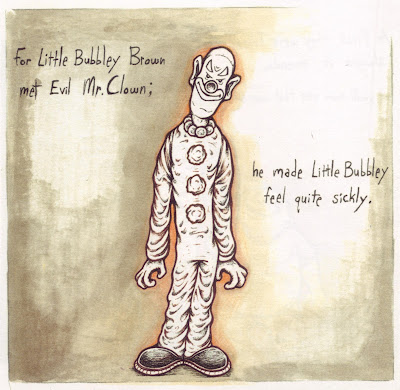 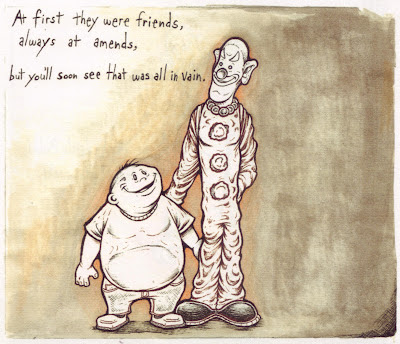 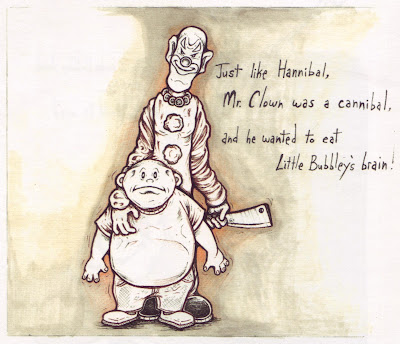 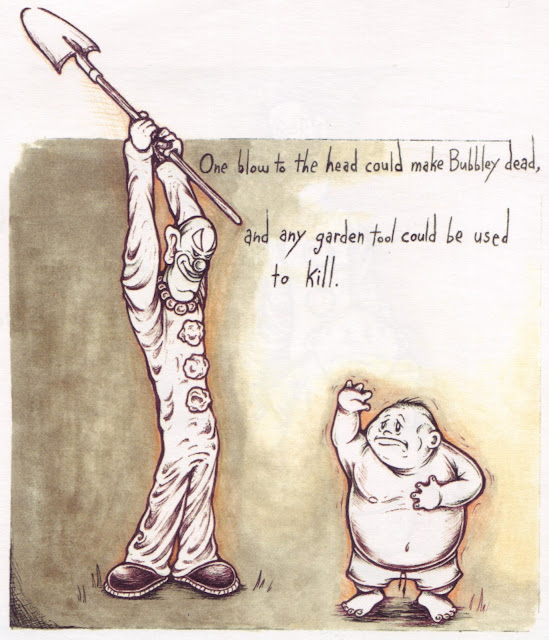 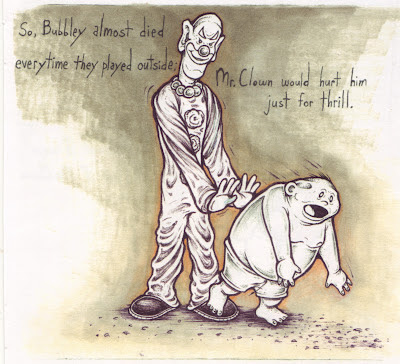 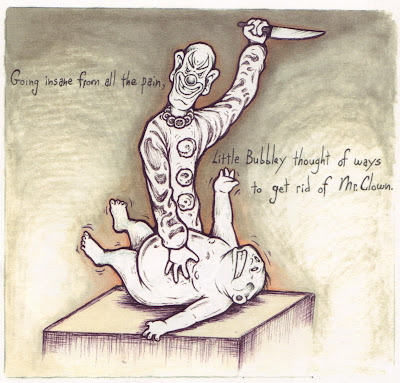 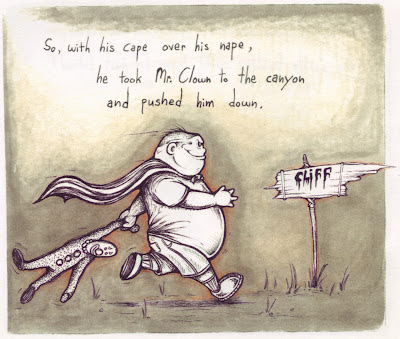 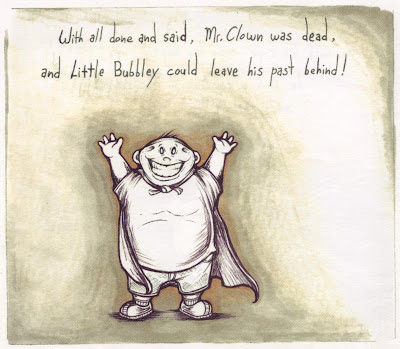 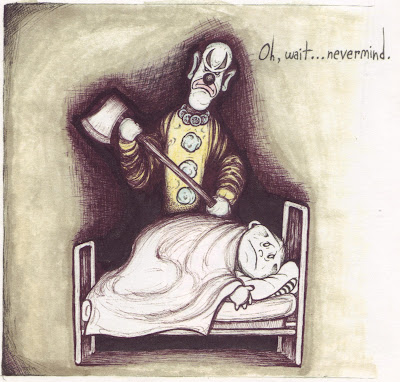 I assume that the majority of people who visit my blog are already familiar with Harley Poe.  Anyone who has a copy of the first Harley Poe CD or has followed my work has probably read this little story.  I've posted it here simply because the booklet in which it was featured is out of print and the album is no longer available.  I've been obsessed lately with seeking out all the books of Charles Addams and have recently finished his autobiography.  I noticed he has several cartoons that tell a story through a series of drawings like the one I did above.  I'm pretty sure "Bubbley Brown Vs. The Evil Clown" was my first attempt at this type of story telling.  If you couldn't tell, I'm obviously a fan of Bill Watterson's Calvin and Hobbes collections as well.
Posted by Joe Whiteford at 11:21 AM No comments: 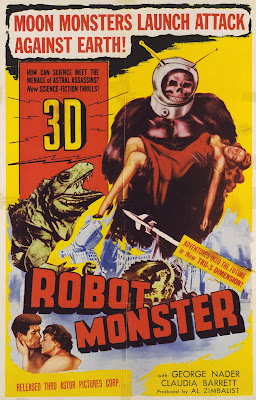 I watched Robot Monster (1953) again the other night...Wow...This movie graces its audience with absurd situations, silly dialogue, and one of the most ridiculous aliens in the history of cinema; but Elmer Bernstein's score is creepy cool and Claudia Barrett makes me sin. Not only that, but it's easily one of the most entertaining ways to spend an evening with friends and drinks.  Check it out! It has so much to offer: Giant beasts, horny alien, ugly children, and encouragement that you too can someday make a movie as quickly and cheaply as these film makers did and still find an audience.

Directed by Phil Tucker and only 63 minutes long, it won't take up too much of your time, and copies are cheap and easy to find.  Pick up the Image Entertainment release for a good transfer and theatrical trailer.

I've paid homage to this gem by creating my own Ro-Man from polymer clay.  I used dead plants and caulking for the landscape and a small apparatus I found in my Grandpa's shop for the space helmet.  Check it out. 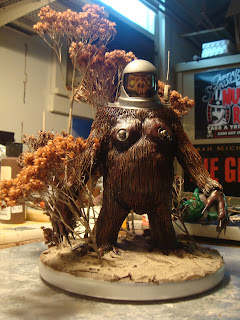 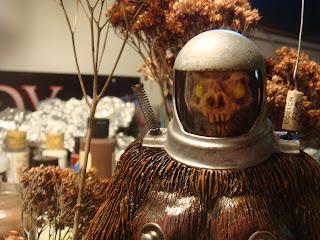 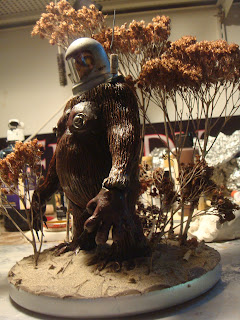 SOLD
Posted by Joe Whiteford at 8:46 AM 4 comments:

Last Halloween, the girl with whom I share my children bought some mums.  They were gorgeous orange flowers that lasted through the month and were thrown under one of our pine trees when they died.  Days ago I found the withered flowers that once gave color to our dark porch, and now they're looking more beautiful than ever.  I used an old lamp base to hold the mums and created three little ghosts to reside underneath this once sad and lonely plant.  This is one of my favorite pieces.  Hope you like. 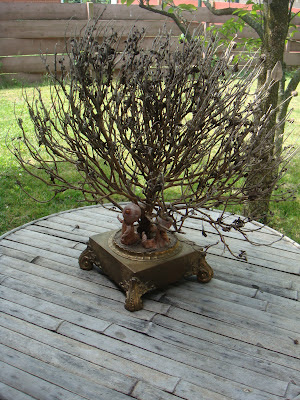 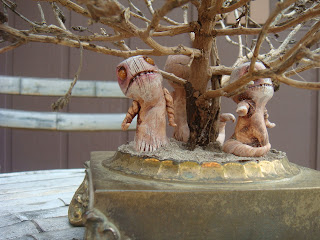 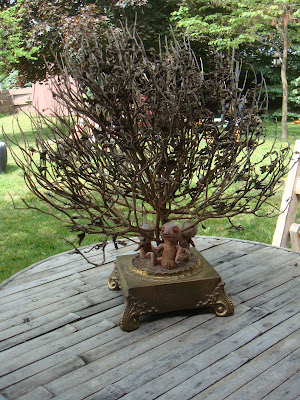 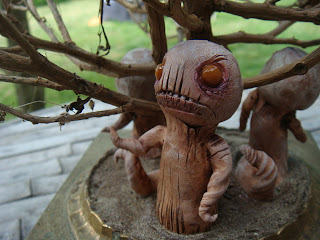 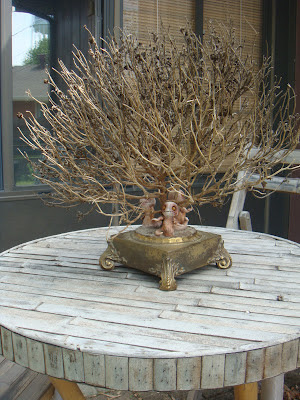 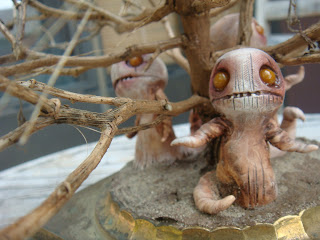 SOLD
Posted by Joe Whiteford at 9:38 AM 2 comments: