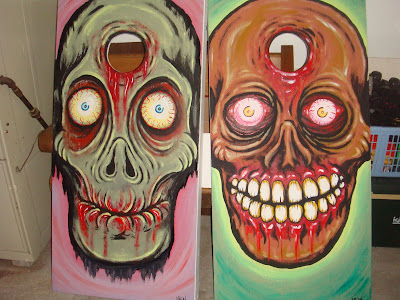 Posted by Joe Whiteford at 12:30 PM No comments:

My little guy helping me paint zombie heads in my shop. 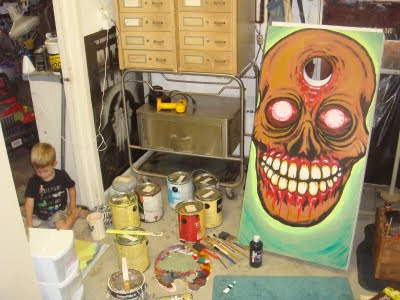 My sister and brother-in-law are throwing our annual Halloween party this year and we're planning to go all out. Most of our friends have children now, so we're trying to come up with fun games for the little devils to play. But we also plan to have games for the adults as well, and since my family has been obsessed with playing Tailgate Toss all summer, my brother-in-law decided to build a set of corn hole boards and I'm attempting to paint zombie heads on them. This year is going to be a blast; I bet you wish you were invited...bitches! 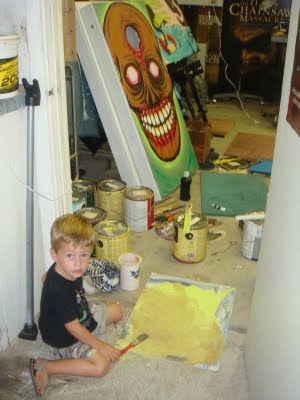 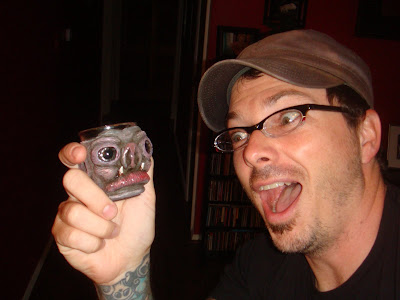 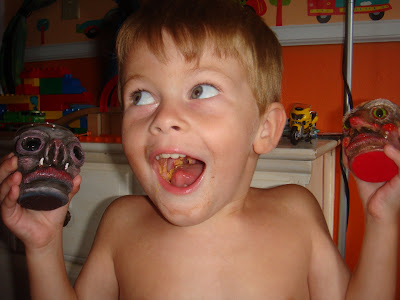 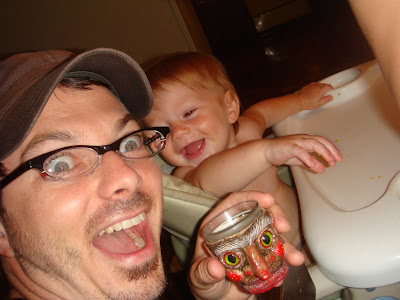 So my boys and I are extremely excited about the new shot glasses I've been sculpting.

SOLD
Posted by Joe Whiteford at 5:28 PM No comments:

Lately I’ve had a growing interest in the low brow art of Ed Roth and those who had worked for him and/or have been influenced by his vision. Within the last year I’ve purchased several books relating to that whole Polynesian/hotrod/1960s monster art scene just to learn more about some of the artists and styles that are out there. Here are a few of the books that I’ve read on Big Daddy and his collaborators: 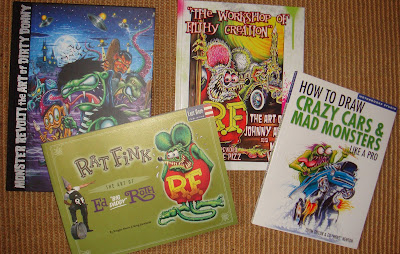 My interest in this primarily West Coast subculture initially stemmed from having a Rat Fink action figure when I was a kid. At one point I also remember collecting a card series released by Topps which featured monsters drawn in the style of Rat Fink and his friends. I didn’t know anything about these hotrod-riding and surfing monsters except that they were gross and looked freaking cool with their popping eyes, warts, and giant yaps flung open, but since reading about their history and of those responsible for their birth, I’ve become a little more knowledgeable of this renegade world of tiki gods and pin striping and have developed my own style of illustrating Rat Fink-influenced monsters.

Rat Fink and his friends represent rebellion, speed, and punk rock. These monsters are the middle finger to whatever is accepted as mainstream, normal, or proper, whether it’s in art, lifestyle, or spirituality. This stuff is right up my alley. The only problem is that I’m not really a car guy. In this world monsters and cars go hand-in-hand, but honestly, I couldn’t care less about noisy, air polluting, resource-guzzling machines. My car serves one purpose, but I’d still rather use my bicycle to get where I’m going.

Big Daddy is probably rolling in his grave. I’ve rebelled against the rebellious. I’ve taken the hotrod out of the picture but left the monster. To a gearhead there’s nothing more appealing than a work of art featuring a metallic beast driven by a greasy, slobbering monster; but to a pervert there’s nothing more appealing than a sexy vixen being driven by a greasy, throbbing monster. Here are two of my own monsters created in the image of R.F. and his buddies. Don't care too much for cars, but I find the female body very appealing. I have no shame, but I’ve still managed to censor myself for those who aren't expecting. I’ve had postcards printed of the following illustrations for those of you who are interested. Contact me at joecalibretto@hotmail.com if you’d like a set. 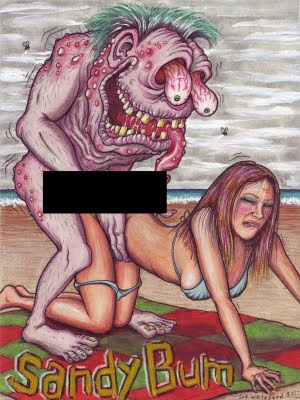 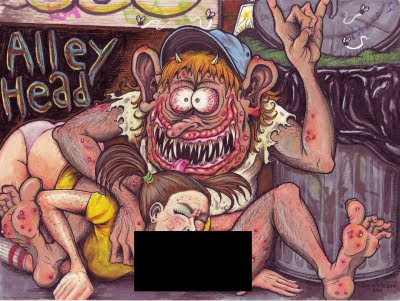 Posted by Joe Whiteford at 9:37 PM No comments: