Back in 2006, Standard Recording Company released a Christmas compilation featuring bands from the label and a few other Indianapolis artists who weren't part of the roster.  Around that time Harley Poe had a new split album in the works with Seattle's Dead Vampires (also released by Standard).  While we were in the studio we had some extra time to record our own Christmas song for the comp.  As a gift to the Harley Poe fans who visit my blog every now and again I present to you our contribution to Standard Recording Company's first Christmas compilation.  The CD also features songs from The Reverend Peyton's Big Damn Band, Everything, Now!, Chad Serhal (She Does Is Magic), and a few other great Indiana bands that have since gone missing.  Last I checked it was still in print and can be ordered through amazon.com.  Enjoy, and if you like what you hear, then order a copy for Christmas.
Posted by Joe Whiteford at 8:58 PM No comments: 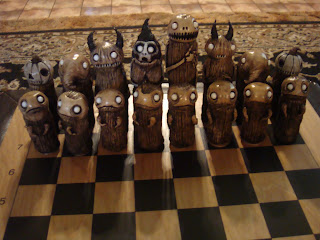 I began sculpting this set months ago, but I've just now been able to finish it due to moving into a new home and dealing with a rambunctious one year old son...I guess my three year old hasn't made it easy either.  I'm glad I can move onto other things such as working on my ABC book and creating some more Krampus figures for the holiday season.  If I see that enough people are interested in this set I'll start making molds to sell for cheaper prices.  Otherwise, if anyone has an interest in this set, then feel free to contact me via email.  I like these pieces more than my last ones.  Anyone up for a game of chess followed by drinks and a movie? 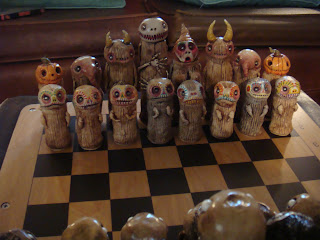 SOLD
Posted by Joe Whiteford at 7:53 AM 2 comments: