Ha! So I lied! I knew I would repaint more of my old Teenage Mutant Ninja Turtle action figures when I stated I was finished for the year in my last post, and I fooled all seventeen of you. Evil Genius I am.  Take that world! Anyway, here are the Rat King and Casey Jones.  I dirtied up the Rat King a bit, painted in the extra details including that giant centipede on his chest (why was that not painted?!?), and gave him more of a mummy living in the sewer look.  The original paint job was much too colorful for a sewer dwelling rat man. 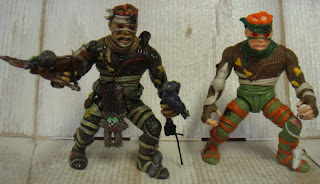 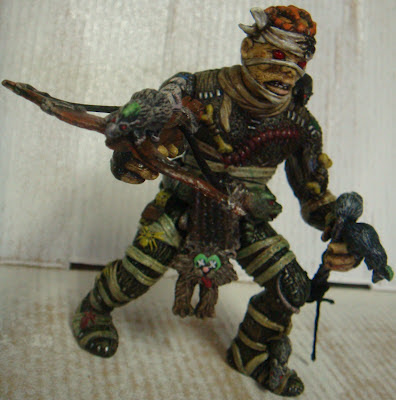 This Casey Jones figure came out in 1989, so I painted his hockey mask to look like that of Jason Vorhees from the same year.  I think I made him look a bit more psycho and maybe homeless.  I liked how the original cartoon portrayed him as a total nut job.  I grayed his hair a bit to make him older as well.  The newer renditions of Casey Jones are of a young, well rounded stud. Well fuck that! This figure has psycho killer written all over him. I didn't have an extra figure to show you comparisons, so Google him to see what I've changed. Hope you like. 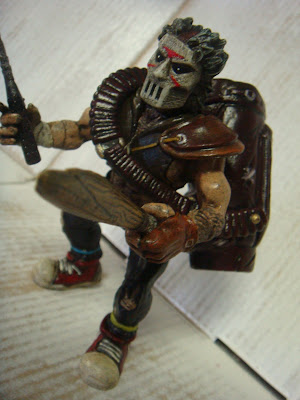 Stay tuned for more repainted figures.  Still tracking down the artists who created these toys and are responsible for helping to create the monster I am today.  I promise my next post will be about something else.  I'll be recommending three killer ventriloquist dummy movies along with a short film from HBO back in the 80s.  I'll also be showing off my short shot-on-shitty-camera disaster I'm making with my family and custom painted Charlie McCarthy dummy.  Happy Halloween!
Posted by Joe Whiteford at 10:51 AM