So I've become a bit obsessed with repainting my old Teenage Mutant Ninja Turtles action figures from my childhood.  I've even gone so far as to track down missing accessories and a few figures I didn't even own when I was a kid.  I've discovered the studio and artist responsible for the sculpts and have stalked him via email, but I suspect he refuses to entertain such weirdos as myself, for he hasn't written back and probably won't.  I've even recently acquired the Toxic Crusaders line of figures also released by Playmates around the same time the TMNT toys were being made, and I'm willing to bet they were sculpted by the same artist. It's safe to say I'll be repainting them after I'm finished with the Turtles line.

Here are the final two figures I'll be repainting for awhile.  The Holidays are on the way and I'll have less free time in the months ahead to waste on painting vintage toys.  So I leave you with the mutant alligator Leatherhead and my first two custom painted good guys Napoleon Bonafrog & Flyboy.  As I've already mentioned in a post or two ago, I plan to do at least ten more of these guys before I start on the Toxie guys.  Until then, it's time for a break.  The wife should be happy; her nerdy husband is putting away his toys... Well, some of them. 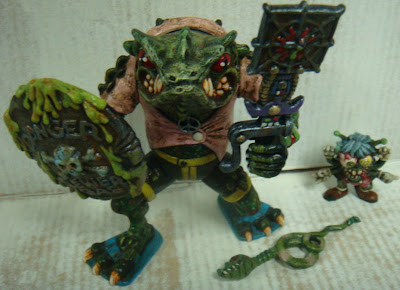 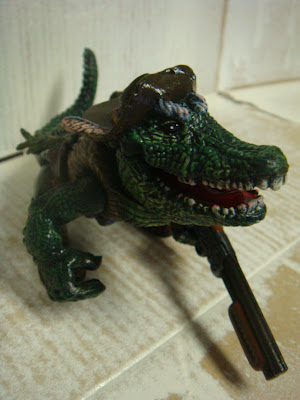 I just finished repainting two more characters from my childhood collection of Teenage Mutant Ninja Turtles action figures. I have plans to do about ten more, including the giant bugs.  Can't wait.

Posted by Joe Whiteford at 11:54 AM No comments: 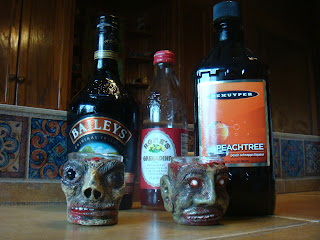 I had six shot glasses left, so I made two zombie heads that will be available on my Etsy store at etsy.com/shop/joewhiteford, so check 'em out if you have a chance.  They'll be sold together. And here's a fun recipe that can be found several places online with different ingredients, prepared much more effectively, and might go by the name Zombie Brain or Bloody Tumor. It's very easy to make. 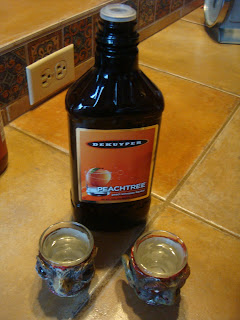 Fill your glasses with peach schnapps.
Slowly pour a teaspoon of Irish cream liqueur on the schnapps. 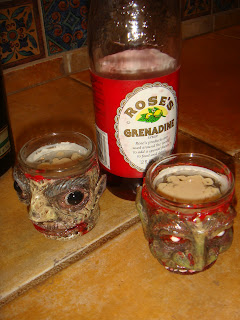 Add a squirt of grenadine. 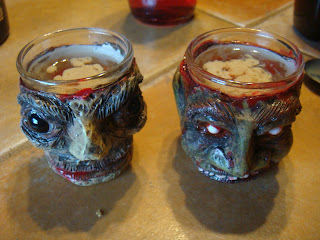 The Irish cream will curdle and give the effect of a brain or tumor, and the grenadine looks like blood (if you add enough). 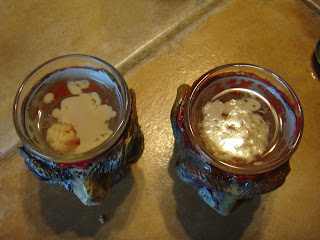 As I mentioned above, mine don't look that great, but they still look gross and taste like actual decomposing brains.  So make yourself some at your next Halloween party and shoot 'em quickly.  Gross.

A few posts ago, I mentioned that my childhood was spent in the 80s absorbing the awesomeness that could have only been found in that decade.  I also mentioned going through the upstairs spare rooms of my parents' house and coming across my old M.U.S.C.L.E. figures.  But I failed to mention that while I was there, serendipity shined upon me as I dug deep into the toy boxes and discovered whatever accessories and random parts I could find of what used to be my Teenage Mutant Ninja Turtles action figure collection.

Wow! How could I have forgotten such awesome Toys?!? How could I have let their weapons and belts get lost into closet obscurity?  What used to be a complete collection of awesomeness was now just loose accessories and broken parts.  I never really played with my Ninja Turtles; I would just set them up and pose them. It was important that I kept them like new, but now they were just random pieces lost in the shuffle of other random pieces.

Regardless, I took what I could find and reassembled whatever pieces that weren't permanently broken.  I brought them home for my boys and gave my old TMNT toys new purpose.  I even managed to find complete sets of weapons for several of my favorite characters, which brings me to why this post is being written.

There is not a soul in the world who hasn't heard of the Teenage Mutant Ninja Turtles.  They're everywhere, and they've been a part of pop culture since the 80s.  Not that familiar? You wanna know more? Just take a short trip to Google Land and educate yourself.  Monthly comics still in print, on going action figure releases, cartoon episodes, three live action films, an animated feature with a new one in the works, and let's not forget the original arcade game. God I loved that arcade game.

Until I was about 12 or 13, I was infatuated with the Turtles.  Every Tuesday I'd go to the local bowling alley with my mom to play that arcade game, until it become available on Super Nintendo.  I also had a copy of the Coming Out of Their Shells cassette tape available through Pizza Hut when the turtles decided to become rock stars.  I owned VHS tapes of the first two live action films, and as I've already stated, I owned most of the original action figure line.  Sheeeeeesh! What wonderful memories!  But enough digressing.

Easily the best part about the Ninja Turtle craze was the action figure line from the late 80s and early 90s.  I'm not too impressed with most of the new figures coming out (the Turtles themselves being an exception), but the original line was a perfect example of sheer craftsmanship and creativity.  The sculpts were so detailed and in many cases extremely gross.  But, hey, it was the 80s; most toys were gross then.  The only thing lacking about the figures, and many a fanboy will agree, were the paint jobs.  Though the toys were bright and colorful, they failed to capture the detailed design the sculptors had in mind.  Plus, this action figure line was made up of mutants and monsters who had no business having such garish paint jobs, even though they were made for children and the brighter colors surely caught the youngsters' eyes.  So like many a fanboy, I've taken some of my favorite figures and given them new paint jobs.  A better paint job brings out the detail in the figure, and thanks to eBay, I've been able to track down certain accessories missing from some of my old figures, rendering them complete and looking better than ever.  Here are Muckman & Joe Eyeball and Scumbug, three of the coolest bad guys from the 1990 series with new custom paint jobs.  Stay tuned for more.