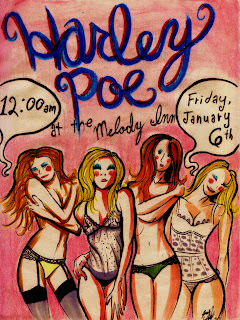 So I guess Harley Poe has a show this next Friday at the Melody Inn.  We're also playing there late February, so I thought this one had been cancelled.  No biggie, we love that bar.  Come see us if you have nothing to do. We're playing with the DeadFrets and one of the members of Slothpop.  The show will probably start around 9 or 10, but we won't go on until about Midnight.  Be there.
Posted by Joe Whiteford at 8:47 AM 2 comments: 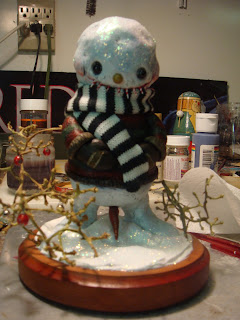 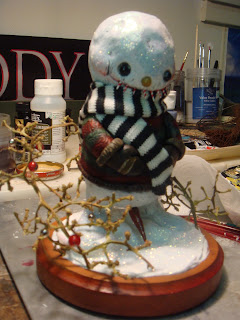 Here is my third and final snowman for the year 2011.  This cute little pervert has candy canes for teeth and a carrot prick.  He was fun to create, and I can't wait to come up with more for next year.

So far, this has been a very exciting Christmas season for me for several reasons:  My family and I are living in my Grandparents' home where I've spent many wonderful Christmas Eves as a child, and my boy Ransom is three years old and overwhelmed with excitement due to the sporadic snowfall, blinking lights, and presents under the tree.  To top it off, It's been a creative month for me.  I've had time to sculpt three mutant snowmen and a Krampus, and the day after Christmas I go back to Fort Wayne to hear the final mix of Harley Poe's new record Satan Sex and No Regrets.  I've also had a chance to get some painting in, because my nephews have asked for some shoes with skeleton feet like the ones I made Ransom for Halloween.  So I've finished these just in time for the boys to open on Christmas morning.  I hope they don't read my blog. 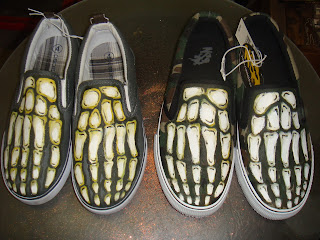 
I had written and illustrated this story years ago and have been trying to get it published in the form of a baby book ever since, but I guess it just isn't meant to be.  Rue Morgue magazine published a piece on me back in issue #54 and featured a few of its pages alongside the article, and I self published and pressed 200 black and white versions about two years ago. Still, I don't feel many people have seen it, and at the time I finished it I was very proud, so it's a bit disappointing.  I guess it's okay that it never got picked up by a publishing company.  It's my first attempt at an illustrated story in the form of a children's book.  I'll do a better job and write a longer story next time.  I've put music to the poem and recorded it in the studio of my buddy and band mate Gregg Manfredi.  So here you go.  Please enjoy.
Posted by Joe Whiteford at 2:49 PM 8 comments: 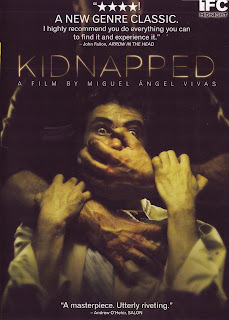 I had read about this film in Fangoria magazine a few issues back.  The article had good things to say about it, and being a fan of home invasion movies like Funny Games (1997), Ils (2006), and The Strangers (2008) I was excited to give it a go, so I saved it in my Netflix queue and then forgot about it.  Well it arrived a few days ago, but I had been putting off viewing it due to my weird quirk of only watching Christmas movies during the month of December.  But I also didn't want to send it back without seeing it and it was holding up the line, so after my girlfriend/wife went to bed I popped it in the DVD player.

A little over an hour later I must tell the world about it, or at least those who visit my blog.  I still can't get the final scene out of my head.  WOW!  If you're a fan of the genre, then this one is a must-see!  But if you don't like those hard to watch, stressful and unsettling horror films in which the good guys seldom win, then by all means keep far away from it.  The actors are convincing, the camera work--especially the use of split screen--is outstanding, and the victims' actions during the more upsetting scenes are more than believable.  This movie shows no mercy, and maybe I'm just an optimistic child, but towards its end, I almost believed that everything was going to be okay...then came that final scene.

Movies like Secuestrados make me want to take extreme measures when it comes to securing my home and protecting my family.  And now I get to go to bed, if I can stop thinking about how disturbing it was.

Posted by Joe Whiteford at 8:50 PM No comments: 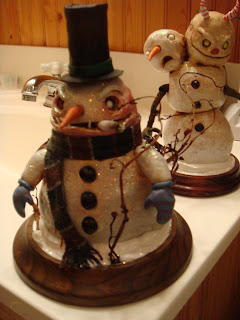 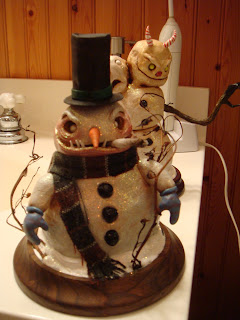 I now have two mutant snowmen. I hope to get one more made before Christmas.  Email me if you'd like an original and I'll give you a price.
Posted by Joe Whiteford at 3:31 PM 2 comments:

When I created this blog a couple years ago, my first post was a list of Christmas horror films that I had compiled for the publisher of a magazine I really enjoy reading.  I was very concerned with sharing my list with anybody who might be interested, because I love holiday horror movies, and like every other misguided and overly opinionated schmuck who thinks he has something to offer the world via blog, grammatically incorrect posts on Amazon.com, or incredibly lame review videos on YouTube, I too believed I had new insight to offer about these films.  In time I’ve come to my senses and realize I have nothing to add that hasn’t already been hashed out to death by these socially retarded fan boys.  Still, it fills a little void, and I happily accept that I am no critic (nor am I a very good writer for that matter).  The movies I review on this blog are movies I love.  If I don’t like a film, I just ignore it.  I’d much rather spend my time raving about the things I enjoy than wasting my time ripping apart the things I can’t stand; I’ll leave that to the real asshole critics.
Alright, glad I got that out.  Moving on, I’d like to recommend three more of my favorite Xmas horror films for the holiday season, and here they are in no particular order.  Enjoy. 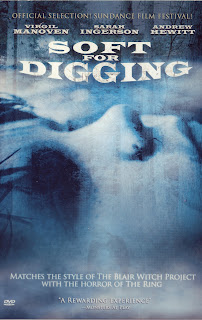 Soft for Digging (2001)
J.T. Petty’s simple yet effective little ghost story is an intriguing watch with almost no dialogue and few characters.  An old hermit witnesses the murder of a little girl in the forest that surrounds his home, but after a community search for the missing body with no results and a few otiose trips to the supposed scene of the crime, the authorities begin to think the witness is just a senile old kook.  This eventually leads to the old man taking it upon himself to solve the crime and, well, things aren’t what they seem.  The story is really nothing new, but the execution is brilliant.  Even my wife who had just worked a thirteen hour shift stuck around until the end.  It’s impressive how one can create a film in which the mundane life of an old man, accompanied by bits of piano sprinkled in between the ambience of the woods and inside the man’s cabin, can keep a viewer’s attention; and this director, with his first film, had no problem pulling it off.  So sit down with some eggnog and a pair of comfy long johns and enjoy. 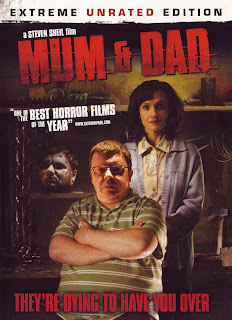 Mum & Dad (2008)
A sexually deranged family of thieves, led by the sadistic husband and wife team simply known as Mum and Dad, work together to kidnap, adopt, and often rape, torture, and murder young people who could potentially benefit the order of things for this fucked-up group of said villains.  In an age when any and all forms of depravity are permissible in the world of horror, it’s hard to judge just how sick this movie really is.  There are thousands like it, but only few in which the actors capture the essence of such evil and disgusting characters as Mum and Dad.  These puppies are sick and easy to hate.  I for one needed the good guys to win this time around.  Check it out.  It’s not really a Christmas movie, but for the last half hour of the film, the family decides to celebrate the season (whether it’s Xmas time or not) with stolen presents, family awkwardness, and good ol’ fashion holiday murder. 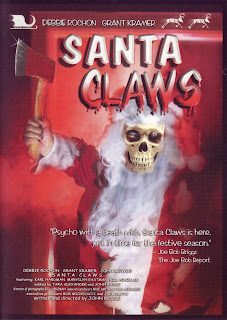 Santa Claws (1996)
Yay for Debbie Rochon!  Yay for boobies!  But other than these two wonderful gifts to mankind, there’s not much else going for this John Russo cheapie.  It’s nice to see the team responsible for the original Night of the Living Dead together again, and I can hang with the idea of trying to combine 1980’s old school slasher film with 1960’s nudie cutie, but sheesh! What a pile of turd!  What a stench of vomit!  What an awesome experience!!!  There is so much to love about this movie.  You get the discrepancies in continuity, dubbing, and any other technical issues that go into movie making, and you get a plot that goes a bit like this:  Childhood trauma causes psychotic, retarded neighbor in love with Rochon’s character to dress up as Santa Claws and go on a killing spree.  Children get drugged, associates get naked and die, loser husband solves the mystery, and scream queen kills the bad guy.  Who watches this shit?
Posted by Joe Whiteford at 10:51 AM 2 comments: 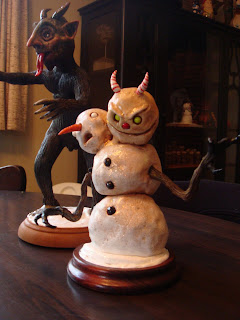 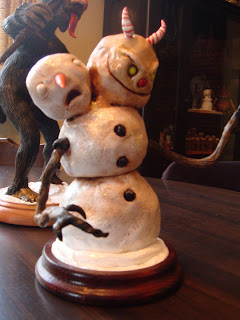 My buddy recently sculpted a set of little snowmen in the image of his family.  I was impressed by what he came up with, and already planning to sculpt several Christmas monsters myself, decided to sculpt my own snowman.  I had sculpted one last year to accompany my Abominable Snowman piece, but I was never very happy with him.  I like this one much more, but he's still not what I someday hope to capture.  The idea came from Bill Watterson's Calvin and Hobbes comics.
Posted by Joe Whiteford at 1:37 PM No comments:

The Return of Krampus 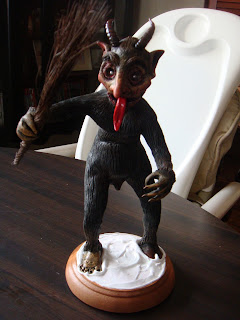 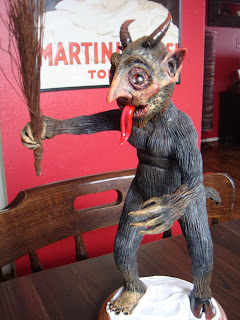 Here is my new Krampus sculpture just in time for Christmas.  If you'd like an original Krampus for your Holiday decorations, just get a hold of me for a price, or check out my etsy store: etsy.com/shop/joewhiteford.  Thanks! And Happy Holidays!

SOLD
Posted by Joe Whiteford at 8:00 AM No comments: